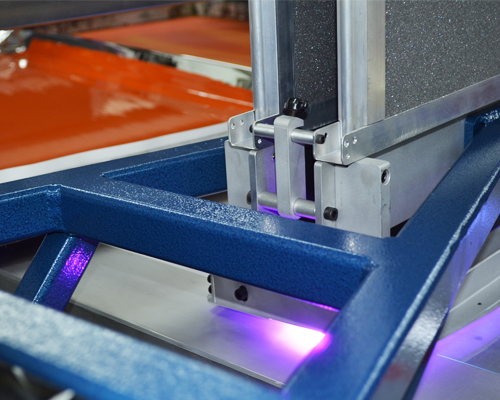 As of January 2020, Empire has completely moved away from the industry standard of solvent inks and embraced 100% UV Ink use in our screen print production, fulfilling a promise made to employees, customers, and planet.

Change did not come in leaping strides, but in smaller steps that were driven by customer and employee needs. Emerging customer needs in the 80s and 90s required the use of a non-solvent inks, and Empire introduced UV mercury vapor cured ink into our production process. During that time, UV ink use gradually increased. By the mid-90s, 25% of production was UV ink and 75% was solvent ink.

In 1998, Empire renewed its commitment to reduce exposure to harmful solvents. We actively pursued our conversion from industry-standard solvent-based inks to UV inks. With solvent inks, 40-60% of what is printed evaporates, exposing Empire’s people and the planet to harmful pollutants and volatile organic compounds (VOCs). UV Inks presented a healthier, safer alternative to solvent inks.

The difference with UV ink technology is the ink stays on the material, with no evaporation and lower VOCs. With UV Inks, it presented additional advantages, like the ability to print finer detail, increased quality, and ink recycling for future production. By the start of the millennia, 50% of all production was UV mercury vapor cured inks. In 2005, 75% of production was UV ink.

On the heels of the recession in 2008, Empire made a pivotal decision to take UV to the next level. We began research and development on implementing UV LED ink curing technology in screen print production. We had to make bold changes to grow Empire out of the recession. Empire was the first printer in the world to successfully implement UV LED curing into the screen print process in 2011.

This was a game-changer: UV LED is 98% more energy efficient than traditional UV mercury curing. Unlike solvent ink or UV mercury vapor ink curing, the combination of UV and LED in the manufacturing process doesn’t produce ozone emissions or harmful VOCs, eliminating the need for ventilation systems. This curing process uses light without heat, allowing them to print on thinner substrates and eliminating material distortion.

Our research and willingness to question the industry status quo led us down this path. However, we did not do this alone. We found willing partners in our ink suppliers—Nazdar, Sun Chemical, Polymeric, Fuji, etc. in developing this revolutionary technology. They could see the vision Empire created with its environmental advantages, economic benefits, process improvements, and opportunities to expand markets. Their show of support in developing UV LED inks exceeded our expectations. We were able to accelerate UV LED implementation with their help.

In 2019, less than a decade after our initial success with UV LED, 99% of our production was UV Inks and 1% solvent inks. As we continued to develop, implement, and improve our UV LED ink technology, what has happened to that 99% is amazing—75% is UV LED and 25% UV mercury vapor! In regard to that remaining 1%, we were poised to take the final leap. As of January 2020, Empire will no longer screen print with solvent inks and embrace the sustainability of UV Inks 100%.

We want to be a beacon of change for others in our industry. Empire’s innovative technology provides a safe and healthy workplace, greatly improving screen printing’s impact on the environment while providing a quality product for customers. Our president has committed to share UV LED curing technology with competitors to help change the way screen printed products are brought to market.

“This isn’t something we felt we could keep to ourselves. UV LED is the future of screen printing. It has allowed us to increase our productivity, improve our quality, empower our employees. It provides a safe working environment for our people and our planet. If that’s our secret, then we’re doing a disservice to the advancements of our industry.”

Check out our Go Green page for a deeper dive into what UV LED has done to drive industry change at Empire Screen Printing. Better yet, plan on attending our Partners in Printing Expo July 23rd and see things first hand. This show presents a unique opportunity to strengthen the print industry by sharing developments and innovative solutions throughout five major print disciplines. Make your commitment to impact the print industry. Together, we will make a difference.