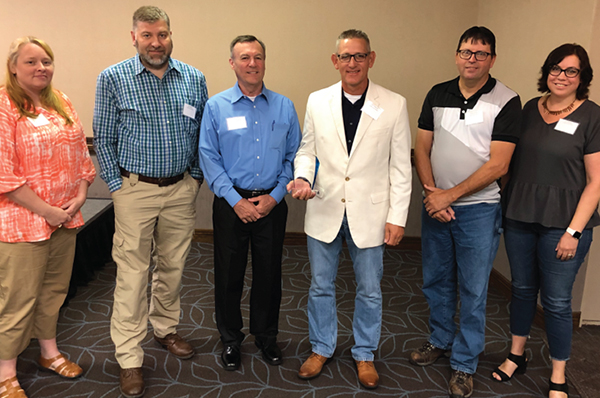 Onalaska, WI: Empire Screen Printing is awarded for its innovation in sustainable screen printing technology. Empire is changing the screen print industry and just recently, they were recognized by the La Crosse Area Development Association (LADCO) and Wisconsin Manufacturers & Commerce (WMC) for their innovations in UV LED ink curing technology.

LADCO honored Empire with the Diamond Recognition – Manufacturer of the Year Award on July 31st, 2019. This award is presented to a company that has demonstrated leadership, quality, innovation, expansion, export focus, and job creation.

“The City of Onalaska is proud that a major homegrown company such as Empire Screen Printing has decided to maintain and grow its operations here over the decades while demonstrating its commitment to environmental stewardship.”

“Having expanded production and diversified its goods to cutting edge high-quality products for many industries, Empire has demonstrated a superior level of innovation, industry leadership, and job creation, without compromising its promise to its employees and community. LADCO and the Coulee region are truly fortunate to have this company in our backyard and it was LADCO’s honor and an easy choice to recognize Empire with its Manufacturer of the Year Award at its 23rd Annual Industry Appreciation event,” adds Jorge Beltran.

On August 13th, 2019 in Madison Wisconsin, WMC announced Empire Screen Printing as the recipient of the 2019 Wisconsin Business Friend of the Environment in recognition of environmental innovation efforts. Empire has gone above regulatory requirements to better support their employees, customers, and the environment.

“It is with great pride that our company has been chosen to receive these awards. Being recognized in our city, as well as the state only validates the accomplishments of our people. We truly believe our innovations will change the landscape of printing, and we’re honored these associations are acknowledging our achievements.”

In 1998, Empire made the bold commitment to reduce employee exposure to harmful solvents. They started converting from industry-standard solvent-based inks to UV inks. With solvent inks, 40 to 60 percent of what is printed evaporates, exposing Empire’s people and the planet to harmful pollutants. The difference with UV ink technology is the ink stays on the material, with no evaporation.

Empire took UV to the next level, in 2008 they started testing UV LED ink curing technology. This was a game-changer, as UV LED is 98% more energy efficient than traditional UV mercury curing. The combination of UV and LED in the manufacturing process doesn’t produce ozone emissions or harmful volatile organic compounds (VOCs), eliminating the need for ventilation systems. This curing process uses light without heat, allowing them to print on thinner substrates and eliminating material distortion.

Since their initial steps towards sustainability, 75% of Empire Screen Printing’s manufacturing process is using UV LED ink curing technology, while 25% is using traditional UV mercury curing. Empire’s innovative technology provides a safe and healthy workplace, has greatly improved screen printings impact on the environment, while providing a quality product for their customers.

Empire has committed to share UV LED curing technology with its competitors to help change the way screen printed products are brought to market.

“This isn’t something we felt we could keep to ourselves. UV LED is the future of screen printing. It has allowed us to increase our productivity, improve our quality, empower our employees, and it provides a safe working environment for our people and our planet. If that’s our secret than we’re doing a disservice to the advancements of our industry.”

For information on LADCO, visit, https://www.ladcolax.com/